From railML 3 Wiki
Unchecked
Jump to navigation Jump to search

The engineering process for JBV is as displayed in Figure 1. The base for the engineering is the overall operative rules and the overall technical design rules. These are compiled into the requirement specification. From these requirements the schematic layout and interlocking tables for a specific station are made, also taken operational requirements into consideration. After the layout and interlocking tables are finished, these are delivered to the supplier, and it is in this change of information we detect that lack in communication might occur. To standardize this information exchange would severely reduce risks that miscommunication occur, as well as risk that the system is misunderstood because of different signalling principles. The information from the supplier to JBV as the system is ready to could also be defined as a data exchange that would be useful to standardize. To digitalize this method would be beneficial to decrease cost and risk regarding human mistakes if information at any time is handled by humans.

The European Union has also required that all countries add their topology data into RINF(Railway infrastructure database). JBV has started this process, and it would be beneficial to link these two works together especially when gathering information regarding topology.

Future use case should handle integration towards 3D modelling for evaluation of e.g. sight distances. 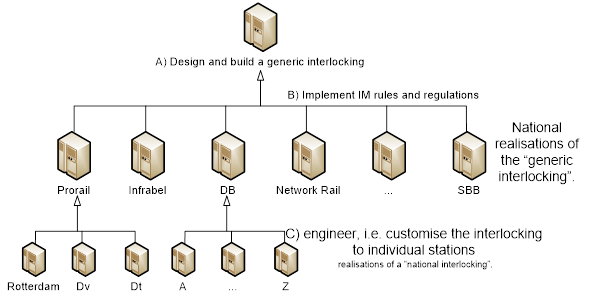 This will show the interaction with data sources and sinks.

These points are needed for JBV to make a fully functional signalling system, and the knowledge about of how these are placed and work together is crucial to the systems functionality.

In the Norwegian track net the stations are classified into groups. To be able to select such a group and configure the toplogy would be useful.

There is no description of this as of today.

This section serves to specify the required data regarding certain aspects.

How often do the data change (update)?

The data change every time some work is done on a station or location along the line. There is a huge variation regarding how often the system will have to be updated.

How big are the data fragments to be exchanged (complexity)?

The most normal in Norway is that whenever a change is made to the signalling system, the entire station is updated. This is defined as one interlocking area in the conventional interlocking systems. There are most stations with two tracks in the Norwegian track net, although Oslo Central Station has 27 tracks and several branches of railway lines.

Which views are represented by the data (focus)?